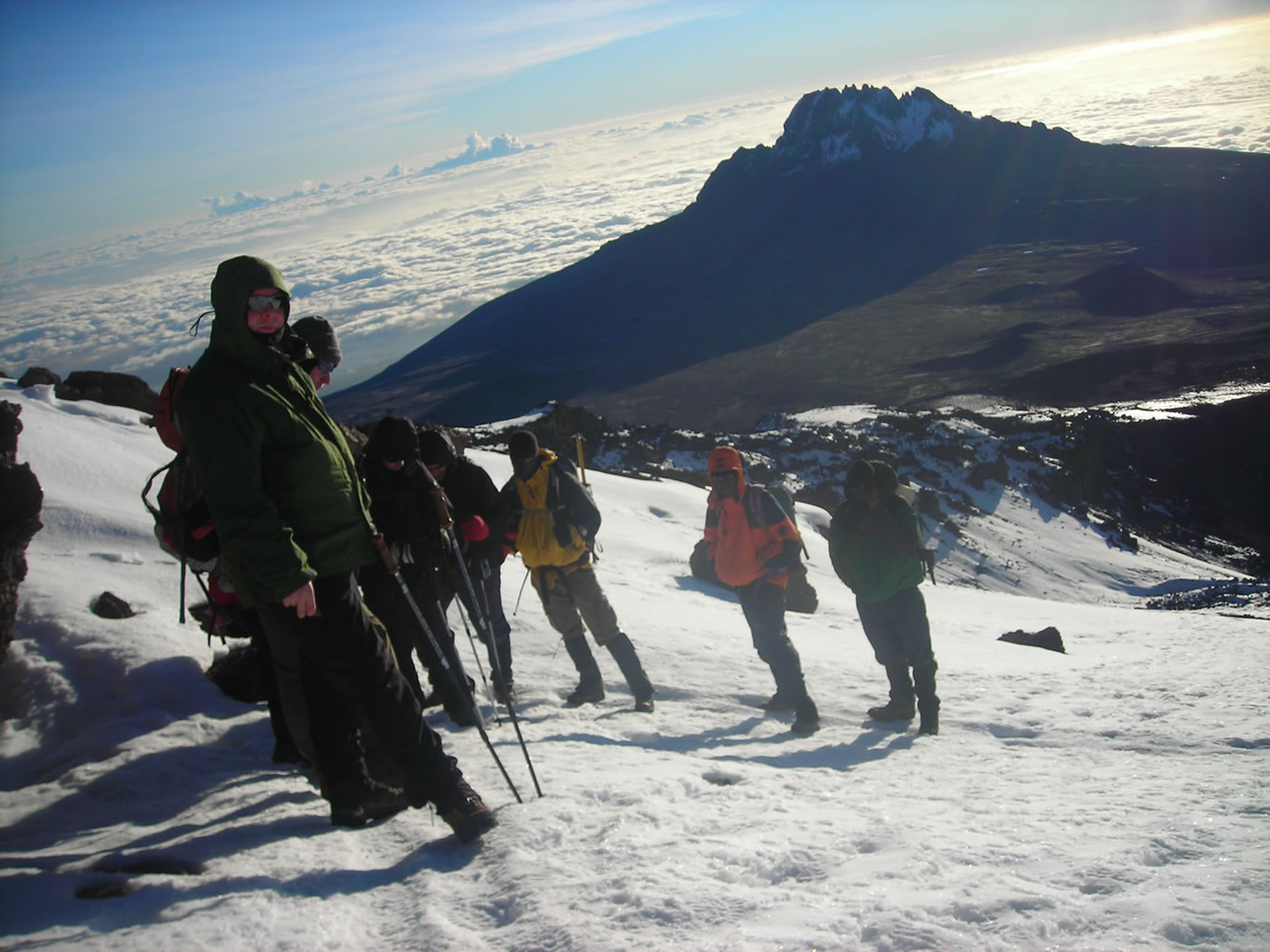 Though often ignored in favour of its big sister Kilimanjaro, Mount Meru is a worthy trekker’s paradise. This massive volcano towers over 3,000 meters above Arusha town, which lies at the foothills on its south side. The mountain endured a violent explosion in the distant past, and in its wake the explosion left towering cliffs in a gaping U shaped ridge facing east towards Kilimanjaro. The crater stands today in a protected amphitheatre of sorts, thousands of feet below the summit rocks. The craggy top lies at the westernmost point of the summit ridge and juts boldly into the sky at 4566 mt. (14,979 feet). From the top, one can look out at Kilimanjaro from the highest perch possible…. Perhaps there is no better vantage point to gaze

at Africa’s tallest mountain, approximately 80 kilometers to the northeast. The trail to the summit follows the northern rim of the natural amphitheatre which forms Meru Crater. The trail skirts the ridgeline, and above the Saddle (between the summit and Little Meru Peak (12,533 ft / 3,820 mt.)), the route is quite steep, with sections of rock scrambling and sheer drops on one side.

What makes this trek truly special is the chance to see animals on foot. The lower section of the trail runs into the forest on the Meru crater floor, with many large, potentially dangerous game animals about. An armed ranger comes along on this trek for safety, the biggest danger being Cape Buffalo and Elephant. You may see while on this trek many animals, including Cape Buffalo, giraffe, elephant, waterbuck, bushbuck, dik dik, warthog, olive baboon, Abyssinian (black & white) Colobus monkey, sykes monkey, and may find traces of leopard, civet cat, red duiker and mountain duiker. Bird life is amazing, with the Momella Lakes close by, attracting thousands of European and African migrant species in the green season.

Morning transfer from Arusha to Momella gate to begin the Climbing of Mt. Meru.

Three hours walk gets you to the floor of the Meru Crater. Afternoon explore the

After breakfast Climb to Saddle Hut which will take about three hours along the steep Saddle walls to Saddle Hut. After Lunch explore little Meru. Overnight at Saddle Hut.

Early morning ascend to the summit of Mt. Meru which will take up to Five hours. Explore the summit then descend to Miriakamba Hut for Overnight.

Descend to Kitoto and proceed to Momella Gate, continue to Arusha.

Usually Mt. Meru Climb is done in Two nights Three days but since descending takes about Seven hours, some Clients might’s want to do it in Three Nights – Four days.

Accommodation in Arusha is not included

Momella Gate to Miriakamba Hut – 3 hrs up to the ridge Explore Meru Crater in the afternoon.

Miriakamba Hut to Saddle Hut 3 – 4 hours. 1 and half-hour Climb to Little Meru in the afternoon.